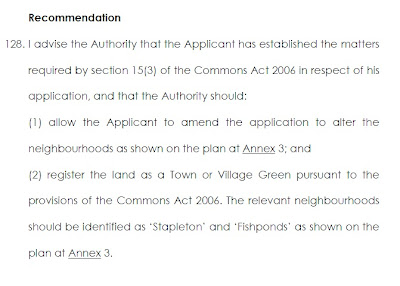 After a 6 day inquiry held in April and August last year, the Inspector appointed by Bristol City Council has produced his more than 100 page report about whether Grove Wood should become a Town Green.

In the report he makes it clear that Grove Wood passes all of the legal tests set out in Town Green legislation and so he recommends that the land should be registered as a Town or Village Green. In the report he makes positive comments on the quality of the evidence provided by Snuff Mills Action Group and the many other residents who sent in statements or appeared to give evidence at the inquiry.

On the other hand the Inspector had little regard for Mr Jafari's evidence. He states that, “I did not find Mr. Jafari a reliable witness. His evidence as to fencing and notices varied in its content when put under pressure, and was inconsistent within itself. At critical moments he gave the impression of seeking to persuade, rather than to state facts”.

During the inquiry Mr Mair (Jafari's agent) was questioned about a document he produced for Bristol City Council in 2008 stating that, ‘the public have taken to walking across the land via any route they please’. This was a crucial piece of evidence in favour of the Town Green. During the hearing Mr Mair sought to retract this statement, but the Inspector was not convinced. He described Mr Mair’s evidence as, “…not reliable. In giving his evidence Mr. Mair’s demeanour was that of the advocate, not the witness.”

The Inspector's report will go before Bristol City Council's Rights of Way Committee soon and it is anticipated that Grove Wood will be designated a Town Green by the spring.

Legally, if Grove Wood is given Town Green status it will mean that residents from the neighbourhoods of Stapleton and Fishponds can enjoy the woods for 'sports and pastimes' - walking, rambling, orienteering, mountain biking and so on.

This, we believe, is how Grove Wood always has been enjoyed and always should be.
Posted by stevem at 19:49 8 comments: