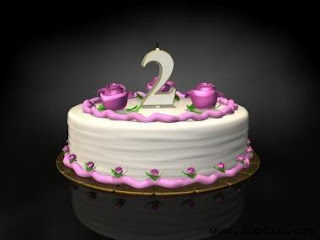 It's two years ago today that over 150 people gathered in Stapleton Baptist Church to launch Snuff Mills Action Group. From our very first meeting we said we wanted to help the Council improve the valley for wildlife and people and make sure Grove Wood was properly protected.

In the two years since we started we have raised nearly £50,000 to improve Snuff Mills and we have been busy getting our hands dirty by renovating the old garden and organising regular litter picks. We've also organised events to encourage more people to enjoy the valley including bat walks and owl prowls. Our People's Millions award will improve the valley for visitors and ensure that every child in Begbrook School gets to experience what Snuff Mills has to offer this year. And there'll be a photo competition and fun dog show this year too. It's probably no coincidence that Bristol City Council describe Snuff Mills and Oldbury Court as the city's Cinderella park and they seem ever more determined to do more to improve the area.

The Group has done everything it possibly can to protect Grove Wood, the woodland on the other side if the river from Snuff Mills park. When we started the Council would not listen to us. They even agreed to the felling of trees in Grove Wood next to Blackberry Hill, despite nearly 120 people objecting. But thanks to the hundreds of people who have written to the Council, turned up at protests and made it absolutely clear that they love Grove Wood, it now has a woodland Tree Preservation Order protecting every tree and the Council have removed the landowner's rights to undertake certain types of development in the wood. We have been campaigning for the upper path to be designated a Public Right of Way and have applied for Grove Wood to become a Town Green - common land for all to enjoy. We believe that Grove Wood should be in safe public ownership and we will continue to campaign for this until it finally happens.

I'd really like to thank everyone who has helped make Snuff Mills Action Group to force for good in the community that it has undoubtedly become, especially those people who have given so much time and energy. Thank you and Happy birthday to us!
Posted by stevem at 19:49 No comments:

Tree surgeons have carefully removed the trees that were making the Snuff Mills toilets feel like a dark and dangerous place to spend a penny. The area is now much more open and easily seen from the car park which means the toilets should feel safer to use and not attract quite so much anti-social behaviour.

Access for people with mobility problems will be improved in the coming months too.
Posted by stevem at 18:16 No comments:

Wessex Water are completing repairs to the drain in Grove Wood today. Overflowing sewerage was reported to them after the last litter pick and they responded very quickly to try and find the problem. The overflow was being caused by tree roots that had entered the pipework and should not happen again... at least for a while.
Posted by andy-s at 16:18 1 comment:

Sponsor a bench in Snuff Mills 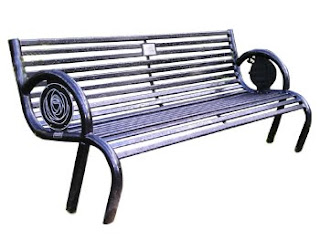 We are about to order some new benches for Snuff Mills as part of the People's Millions lottery funded project.

You could help us make the money go further by sponsoring a bench, perhaps in memory of a loved one or just as a way of saying how much you love the valley. The full cost of a bench including a plaque is £677, but we can offer sponsorship at £350.

We have chosen a metal, near vandal proof bench (pictured), which we hope will last many years. If you are interested, email us at snuffmills@hotmail.co.uk and we can sort it out from then on.
Posted by stevem at 19:04 No comments: 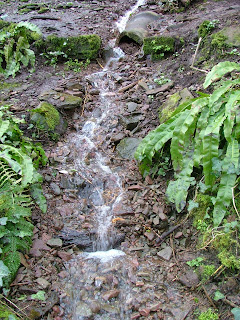 Have you noticed all the water that trickles down Grove Wood just as the footpath heads uphill. We thought this was a broken drain, but Wessex Water have investigated and they tell us it is a natural spring. There used to be several natural springs on the Snuff Mills side of the valley before the quarrying took place and there are still places where water seeps out of the rocks, but it is good to know that a spring has sprung in Grove Wood.

Meanwhile, the first day of spring seems to have finally woken up all of the wildlife in the valley. Many woodland flowers are starting to sprout and daffodils are flowering in the garden. Birds are also preparing to nest with blackbirds, magpies, 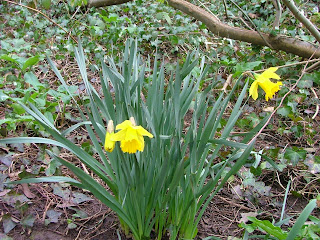 great and blue tits and many other songbirds all collecting nesting material to start building their nests. The valley is a great place to see the seasons changing - don't forget about our dawn chorus event on April 11th when you'll be able to meet a bird expert who will be able to tell us which birds are which!
Posted by stevem at 17:22 No comments: 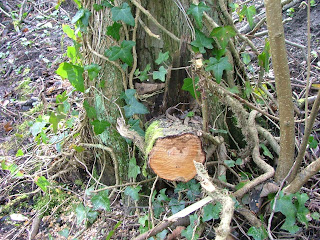 This picture shows a branch of a tree that was sawn off in Grove Wood. It might not look much, but a member of Snuff Mills Action Group has written this eyewitness report regarding an incident in Grove Wood this morning (Sat 20 March):

"Mr Jafari turned up in Grove Wood with two workmen today. Within minutes they got out chainsaws and began cutting wood along the river bank. Four members of Snuff Mills Action Group went to ask them to stop. We started by telling Jafari that he was breaking the law because he was disturbing protected species. Kingfishers were nesting and the otters were present but he denied there were any there - but perversely he did want to know where they were.

He then began to get very abusive towards us all, swearing a lot and pointing his finger in our faces. We remained as calm as we could and kept repeating that he should stop.

We then pointed out to the workmen, who were taking quite an interest, that they were being asked to break the law and asked if they realised this. They didn't of course but, all credit to them, they downed tools almost immediately and left soon after.

Jafari denied the Council had told him to remove the cabin, denied that all sorts of people had told him not to disturb wildlife and said he was going to put two more cabins in the woods. He even denied that he had been summoned for not removing the cabin and finally insisted that Bristol City Council had ordered him to go and do what he was doing with his chainsaws.

We went over to see what damage had been done after Jafari had gone and found that one branch of approx 6 inches diameter had been lopped from one tree and another tree had been sawn off completely. This tree was laying on its side (presumably one he bulldozed previously), but was most definitely alive and had lots of sprouting branches. I would have thought this broke the TPO and he's already got away with doing that once last Autumn so should not be allowed to do so again. I don't know what he might have done if we hadn't persuaded the workmen to stop."

This account would seem to amount to clear evidence that Mr Jafari has both contravened the Woodland Tree Preservation Order that prohibits any trees from being felled in Grove Wood, no matter how small they are. There may also be a case to be answered because of the apparent deliberate disturbance of protected species. We await the invesitgations of the appropriate authorities with keen interest.
Posted by stevem at 19:30 8 comments: 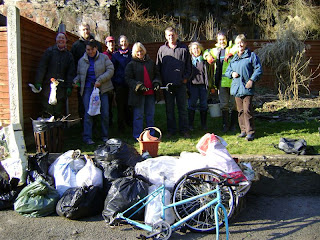 Look at all the rubbish we collected from Snuff Mills and Grove Wood today (Sunday 7th March).

From Snuff Mills we collected an old bike, car battery and inumerable beer cans (someone in the area is a big fan of Stella Artois and Fosters). We also collected a few new helpers on the day too. Thanks for joining us.

We removed lots of rubbish left along the footpath in Grove Wood as there was no sign of the landowner ever bothering to clear up the woods. Most of the rubbish seems to coincide with where anglers like to fish and included corn beef cans left with their sharp edges open just ready for wildlife, dogs or even a child to cut themselves on.

A couple of people wore waders and checked the river for discarded fishing line too.
Posted by stevem at 18:29 3 comments: