Don't get off Laundry Field 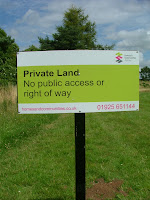 Can you believe it? Within weeks of buying Blackberry Hill Hospital, including Laundry Field, the government's Homes and Communities Agency has been surveying Laundry Field and have now put up signs seeking to prevent any public access beyond the existing public footpaths that cross the field and go around the edge of it.

This is despite the HCA's original statement that they had "identified the site as suitable for mixed-use development which when brought forward, may include shops, commercial space, community facilities and open space, as well as up to 350 new homes" 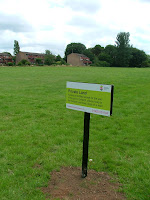 We've been checking on the status of Laundry Field and it is marked on the Council's own planning documents as open space. The action of the HCA are clearly intended to prevent the designation of a Town or Village Green for the site, but we have already been sent enough evidence to show that it has been used for legal sports and pastimes for more than twenty years. So they'll have a real fight on their hands, especially if they continue to behave in such a heavy handed manner. Snuff Mills Action Group are meeting later this week to discuss how we should respond to yet another threat to the greenspaces that make this area so special. In the meantime we urge you to keep enjoying Laundry Field.

You can also let the Regional Director of the HCA know your feelings about their actions by emailing him at colin.molton@hca.gsx.gov.uk
Posted by stevem at 18:20 7 comments: 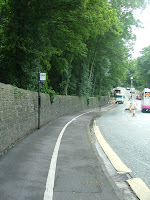 As promised, the Council pruned the trees along Blackberry Hill on Wednesday 22nd July. This much needed work means that cyclists and pedestrians can use the pavement next to Grove Wood safely and that any demands by the landownner to fell them should be turned down because they do not pose any sort of health and safety risk. 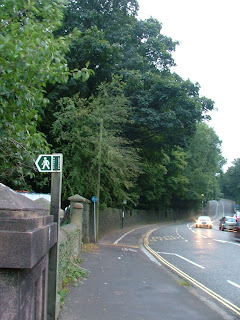 The top picture is after the trees were pruned and the the bottom one is how they looked last year. This shows that the work seems to have been done with as much sensitivity to the amenity value of these trees as possible. A far cry to what could have happened if the original decision to fell them had not been challenged by local people and a real indication of just how much Bristol City Council's attitude to Grove Wood and its trees has improved.
Posted by stevem at 20:38 4 comments:

A court case took place in Cardiff in early July which was relevant to Grove Wood. Following a few calls to Cardiff by members of Snuff Mills Action Group, we have been given to understand it was some sort of an objection to the Tree Preservation Order on Grove Wood. These case details were posted on the Court's website:

The outcome of the case has now been published and here is what a news agency has sent out on the wires: BRISTOL City Council has fought off a unique High Court challenge by one of its own forestry officers who attempted to stop part of a Stapleton wood from being protected by a tree preservation order.

He inspected the trees allegedly felled and, after deciding that "no illegal activity had taken place", Mr Bown decided in July last year that no tree preservation order should be issued to protect 27 trees along the wood's boundary and the adjoining road.

Eventually, Mr Bown was overruled by the council's planning committee which confirmed a Woodland Tree Preservation Order over Grove Wood in April this year.

Mr Justice Wyn Williams said Mr Bown did not, as a private individual, register a formal objection to the order, although he "feels passionately that a Woodland Tree Preservation Order over the whole of the wood was completely unjustified".

The judge added: "As I understand it, he has made that view known with vigour to his employers, Bristol City Council".

At the High Court, Mr Bown put forward "at least seven or eight" reasons why the order should be overturned, but the judge said that, on the face of it, many of his complaints were "not strictly legal points".

He said he had reached "the strong provisional view" that Mr Bown's arguments were "certainly not points upon which it would be proper to quash the tree preservation order" over the wood, which is part of the Stapleton and Frome Valley Conservation Area.

The judge in the end dismissed Mr Bown's case on grounds that - as he is neither the owner of Grove Wood, nor does he live nearby - he is not a "person aggrieved" who would have a legal right to challenge the council's decision in court.

To allow Mr Bown to pursue his case, said the judge, "would be to widen the category of persons permitted to make such challenges far beyond that which was intended by the legislature, as interpreted by the Higher Courts".

"On the 15th May 2009 a Highway Enforcement Notice under section 154 of the Highways Act was served on the owners of Grove Wood. The notice required the removal of the overhanging tree obstruction on the Broom Hill / Blackberry Hill highway and also the removal of fallen trees from the Public Right of Way No 153 running through Grove Wood.

To date, no works have been carried out by the owner.

As a result council arboricultural contractors have been instructed to carry out the works commencing on Wednesday 22nd July. An ecological survey will be carried out prior to the works, and an ecologist will also be in attendance during the treeworks to oversee the species protection issues. 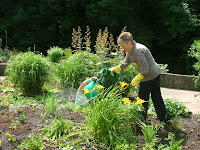 We have yet more plants to put in to the borders in the garden and we will be working hard during June and July to contiinue to brighten up the garden with different sorts of plants. The next few dates are:
Sunday 12th July 10-12noon, Sunday 26th July 10-12noon 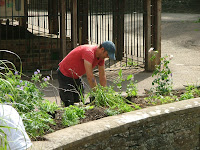 We have now planted the top border with new plants and we will introduce more plants in the coming weeks. We'll also be weeding and caring for the areas we have already renovated. All this work is thanks to funding from the Co-op, John Lewis and Bristol City Council and the dedication of people who care about the valley.

Please come and help and bring basic gardening tools and gloves if you can.
Posted by stevem at 20:05 No comments:

It's a great chance to enjoy the evening sunshine (last year's was held on about the only decent day we had last summer)and chill out in an area that is one of Snuff Mills best kept secrets.

Just bring some food and as it is Bastille Day, there is a slight French theme in honour of the fact that Blackberry Hill Hospital was used to house French prisoners of war a very ling time ago, so baguettes, onions, stripey tops and berets are all very welcome.
Posted by stevem at 18:08 1 comment:

The overhanging trees, the same ones that would have been felled without the Tree Preservation Order now protecting them, have been pruned for the benefit of pedestrians and cyclists using the pavement. This has been a long time coming, but worth the wait, as it's a really subtle job, which hasn't spoilt the visual impact of the trees at all.
Posted by Unknown at 13:02 2 comments:

It would appear that the Blackberry Hill Hospital site, adjacent to Grove Wood and overlooking a large part of the Frome valley has been sold off by the NHS. See the article below taken from a property related website:

The Homes and Communities Agency(HCA) and the North Bristol NHS Trust (NBT) today announced that Blackberry Hill Hospital has been sold to the HCA, the government’s housing and regeneration agency.
Commenting on the purchase Colin Molton, Regional Director of the HCA in the South West said: “The Blackberry Hill hospital site provides an excellent opportunity to create a vibrant and sustainable new community in the heart of Bristol. We will ensure that the scheme delivers significant benefits not only to those who will come to live there but to the wider local community in terms of employment, community facilities and ripple effect it will have on other potential development sites in the area.”
The hospital, located in the Fishponds area of Bristol, has seen many changes over the last few years. With the majority of the hospital’s clinical services transferred to Frenchay and Southmead hospitals in 2005, and alternative community-based rehabilitation services provided by local PCTs, much of the 21 acre site was unused.
A proportion has now been released from NHS use. However the Avon and Wiltshire Mental Health Partnership NHS Trust will continue to offer a range of health care services from its facility adjacent to the Blackberry site.
The HCA has identified the site as suitable for mixed-use development which when brought forward, may include shops, commercial space, community facilities and open space, as well as up to 350 new homes.
The HCA believes the development could bring significant benefits to the local community. The Fishponds area of Bristol has a need for more affordable housing and nearby Eastville has been identified as a Neighbourhood Renewal Area by Bristol City Council. It is anticipated that the Blackberry Hill development will act as a catalyst for further regeneration projects in and around the area.
As with all HCA projects, the development will include extensive consultation with local community and stakeholder groups, and will meet the HCA’s quality design and environmental standards.
In order to facilitate the smooth transfer of the remaining healthcare services on the site, the North Bristol NHS Trust will lease the site until the end of November 2009 when the Education and Training Department will transfer over to the new Learning & Research buildings at Southmead. The Trust will also continue to lease the premises for BRACE Charity for Alzheimer's research and the Regional Quality Control Laboratories until July 2010.
Sonia Mills, Chief Executive of North Bristol NHS Trust, said: “The sale of North Bristol NHS Trust’s land at the Blackberry Hill site is a significant step. The money raised from the sale will be used to help repay the historic debt and forms part of our agreed debt repayment plan.”

I would have to dispute the need for affordable housing in Fishponds as the area will be left with a glut of empty rented property when the hospital/faculty for social care closes. Fishponds doesn't suffer with a lack of such housing at the moment, with prices generally below other areas in the city. Also, surely the roads locally will be unable to handle a development of this size.
Will we find open spaces which are within the hospital boundary are also swallowed by the developers? What price the Laundry Field?
Posted by Mogz at 09:23 15 comments: