More Awards for our area 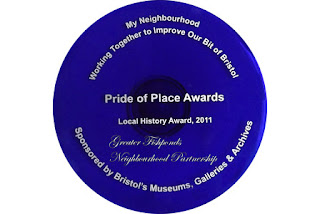 The Greater Fishponds Neighbourhood Partnership area recently won an award for its local history and community organisations. The award was given by the Lord Mayor who repeatedly mentioned Snuff Mills Action Group during his speech as a great example of local people who care about their area and its history. The award can be seen at Glenside Hospital Museum http://www.glensidemuseum.org.uk which is open Wednesday and Saturday mornings. Our area is full of community groups who care passionately about this very special part of Bristol, including the Fishponds Local History Society and the Stapleton and Frome Valley Conservation Society who all share the credit for the award.
Posted by stevem at 20:21 No comments: 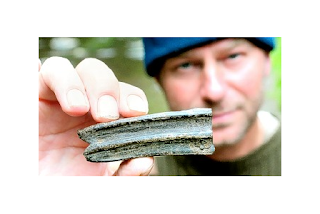 Steve England, our local fossil hunter, has recently found a tooth from an ancient horse from the river Frome in snuffmills.

During his fossil walk last June, Steve explained how the grey “pennant sandstone” of the gorge contains many fossils of extinct plants and animals.

He explained that the local rocks were originally laid as sediments from river deltas some 300-360 million years ago during the period described by scientists as the Carboniferous. The remains of ancient plants and animals were left in the sediments too.

After great pressures and the effects of ancient earthquakes, many rocks from the valley can now be split and squared easily for use as building stone. From the old quarries, Steve has collected many Carboniferous aged fossils, but has now found animal remains from the more recent ice age.

As reported last month in the Bristol Evening Post, Steve found a tooth from an extinct species of horse, which must have lived in the valley some 600,000 years ago.Read this following article:

http://www.thisisbristol.co.uk/Ice-Age-discovery-river/story-12946437-detail/story.html
Posted by richp at 14:17 No comments: 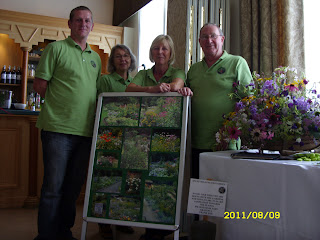 Members of Snuff Mills Action Group's enthusiastic gardening group recently spent the evening at Bristol Zoo as part of the judging for Bristol in Bloom. The team took photographs of all the work that has been done to improve the garden as well as some flowers freshly picked from the garden.

The judges have already said how impressed they are with the work we have done to make the garden something really special. We are waiting to see if that means we will win an award for all the hard work. 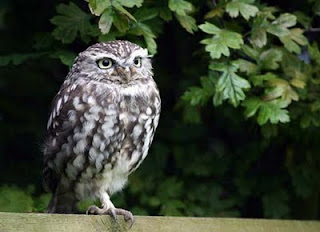 Little owls have recently been heard calling in Grove Wood in the early evening and later into the night. There are resident tawny owls as well and people have also reported seeing more of the otters. This is a good indication that the lack of disturbances in the woods this year is helping wildlife to return.
Posted by andy-s at 10:26 No comments: 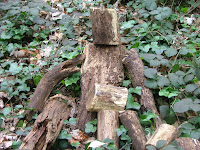 The The final stages of the Inquiry in to whether Grove Wood should become a Town Village Green takes place on Thursday and Friday of this week (4th-5th August). The objectors (Mr Jafari and his land agent Mr Mair) will present their evidence and be cross examined by Snuff Mills Action Group and there will be summing up from both sides.

The Inquiry takes place in the Council House on College Green between 10-4pm on both days, please come along to witness for yourself the evidence to be given by the objectors.
Posted by stevem at 09:35 2 comments: