Jafari and Rhino Group were in court last week appealing their criminal conviction for not removing the shipping container when directed to do so by Bristol City Council. After two days in front of three judges, the appeal was dismissed. The judges were not convinced by John Mair's (Jafari's agent) claims that 'remove' simply meant 're-move', that is simply moving the container a little bit. The judges were also satisfied that Bristol City Council's witnesses were honourable in their intentions and had no hidden agendas with regard to Grove Wood.

Costs were awarded against Jafari and Rhino Group. Jafari claimed Rhino Group had no money to pay costs and the Judges made it clear that if that was the case, Jafari would have to pay all costs.
Posted by stevem at 09:24 No comments: 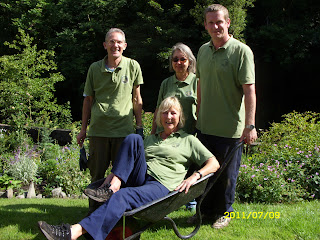 Representatives of the Royal Horticultural Society and Bristol City Council visited the Snuff Mills garden over the weekend to look at all the work that has been done by the Action Group to improve it. We are hoping that all the hard work of the volunteers (some pictured here including gardening coordinator Jean Davidge in the wheelbarrow) will be rewarded with some sort of acolade from the RHS or the Council. They deserve it for all the hard work and for transforming the garden in to a thing of beauty.
Posted by stevem at 19:36 2 comments: