A short film of our recent Mutt Strut by Richard Pring
Posted by stevem at 15:21 No comments: 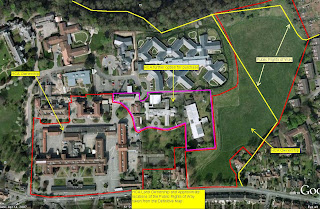 On the 28th April a meeting was held at the Baptist Church Hall on Broom Hill.
The main topic of conversation was a discussion over the future of the Old Blackberry Hill Hospital Site and the adjoining Laundry Field.
Invited to attend were representatives from the current owners the Homes and Communities Agency (HCA) namely Jay Lambe, Niki Wagstaff and Ben Lowndes.
In no particular order the meeting discussed the following:
Jay Lamb explained who the HCA were and gave some examples of the projects they had been involved in recently.
She also confirmed that they are the current owners of the site and have recently advertised for expressions of interest from developers to form a partnership with the HCA in developing the site.
This is done via a tender process and as part of this tender the developers would be expected to detail their vision for the site and also how they would engage in consultation with the community and other interested parties (stakeholders). It was emphasised that community involvement would be a key aspect in bringing forward any proposals for the site and this would include any development of laundry field. It was stressed that no decisions have been made in regards the future of Laundry Field. It was also pointed out that the historic nature and the presence of listed buildings within the hospital site would also have to be taken account of in any development scheme.
Niki explained her role as the Estates Manager of the site for HCA and outlined the work that the HCA had undertaken since its acquisition of the site. This included securing the building, tree surveys and tree works to many of the trees across the site. Works had also been done to some of the listed buildings with full approval of Bristol City Councils heritage team. Signs had also been erected on Laundry field stating the legal ownership outlining the public rights of way. This was required to protect the HCA from the potential of claims if somebody should injure themselves on the field when not on the footpaths.
Throughout the meeting much discussion took place over community involvement and the openness of the process that would take place. Apart from certain financial aspects of any agreements made it was explained that the process would be open for all to see but the appointment of the development partner would be the HCA’s decision due to the financial aspects and ensuring the right partner was chosen in a timely manner.
Members of the HCA left the meeting leaving the meeting to continue with discussions over what had been said and whether a Town and Village Green Application would be submitted to Bristol City Council.
After much debate it was agreed that the erection of signs stating that the land was private property and access was only allowed on the public footpaths could legally be deemed as prevention of the publics’ right of access to the field, and as such a Town and Village Green Application should go ahead.
Any queries about the day to day activities should be directed to Niki Wagstaff at Niki.Wagstaff@hca.gsx.gov.uk or tel 0117 937 7219 this should include any suspected vandalism/damage.
If you need any further information regarding the future developments should be directed to Ben Lowndes at Ben.Lowndes@hca.gsx.gov.uk or tel  0117 937 7209
The Ariel photograph shown is a plan of the ownerships boundaries reproduced approximately onto a google earth image, thanks to plans of the HCA’s ownership that cannot be displayed due to copyright. We take this opportunity to thank the HCA for attending the meeting and providing information to produce the above plans.
Posted by markL at 22:41 No comments: 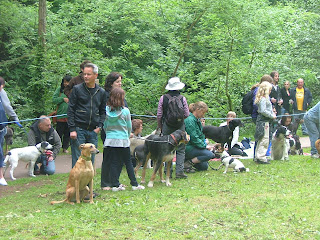 The valley was full of dogs on Sunday for the second Snuff Mills Action Group sponsored mutt strut and fun dog show. We had more dogs taking part in the walk and especially the dog show compared with last year and everyone had a great time. By the end of the event all of the dogs were behaving like long lost friends, and one recently rescued Staffie had changed from a nervous little thing in to quite a confident hound. 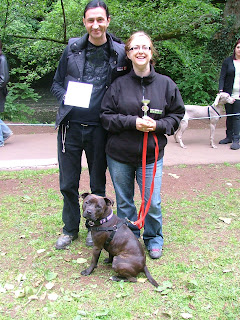 Special congratulations to all the winners in the fun dog show and special congratulations to rescued Staffie Oscar (middle photo), this year's best in show, and the reserve best in show, Sam the lurcher (bottom photo). Oscar is set to feature in the evening post soon as his owner has told us: "I’m Paul and along with my partner Klaire we own Oscar the staffie who won the King of the Valley and overall dog show prize last Sunday at Snuff Mills held after the Mutt Strutt (which was great fun!). Anyway I just wanted to let you guys know that I contacted the Bristol Evening Post (my tagline was: from stray dog to show winner in six months!) and they plan on taking a photo of us and Oscar and publishing an article in their newspaper which will thus be seen right across the Bristol area. This will also generate publicity for Snuff Mills Action Group and Bristol DAWG" 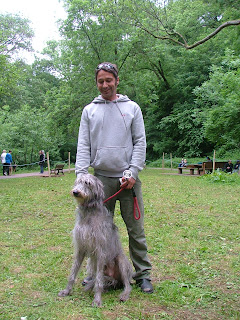 All profits from the event will be shared equally between Snuff Mills Action Group and DAWG - Dog Action Welfare Group Bristol. A special thank you just go to Gerry Watkins from DAWG for judging the show for the second year and to Chris Williams and all the other volunteers from Snuff Mills Action Group who made it such a fun event.
Posted by stevem at 19:09 No comments: 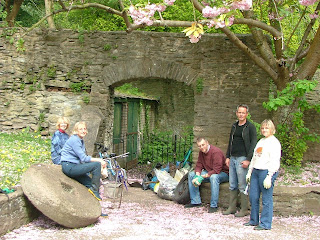 Join us for our spring clean of the valley on Saturday 7th May from 2-4pm. Bring gloves and a sturdy bin liner if you can. Meet in the garden area.
Posted by stevem at 21:04 No comments: