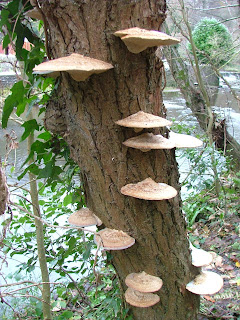 This amazing bracket fungus is growing on this tree in Grove Wood. It's just the sort of beautiful sight that would be lost from Grove Wood if the landowner had his way and removed all of the so called 'dead, dying or dangerous trees'. This picture is a really good example of why a variety of trees of different ages and in different states are so important for wildlife. Let's hope Bristol City Council hurry up and turn it in to a nature reserve soon.
Posted by stevem at 19:09 1 comment:

Jafari fails to make a case for his Container.... 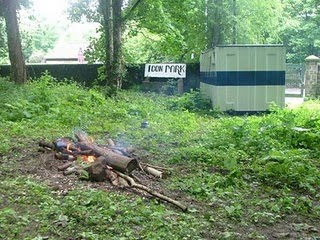 This morning saw the verdict and sentence handed down in the long running saga of the Grove Wood Shipping container.
Rhino Group and Housang Jafari were in court as the two defendants in a case brought by Bristol City Council following their failure to remove the container (pictured) when an enforcement notice had been issued.
Following two days in court last week during which Jafari's Solicitior and fellow Rhino director John Mair tried to obfuscate and befuddle all around him, the judge gave an eloquent speech today explaining that the case before him was "Not complex" as the concept of "removal" was quite a simple one. Mr Jafari had been told to remove the container, he had deliberately ignored the instruction, and so was guilty. Simple as that.
During his summing up, judge David Parsons used words such as "Disingenuous" and "Spurious" then said that Rhino Group had tried to "mislead the court and the local authority". He also said that as a businessman, Mr Jafari seemed to have bought the wood without "any clear idea of what he was going to do with it". Conflicting claims of a "memorial garden" and "forestry" use had obviously carried no weight with Judge Parsons.
Mr Jafari and Rhino Group were both fined £765 each, and costs of over £8000 each were awarded against them.
Evening Post article here
Posted by Mogz at 21:28 3 comments:

Jafari and co try to sneak in containers to Grove Wood 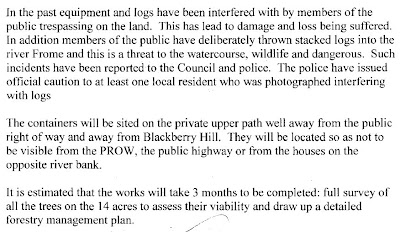 They claim that the containers are needed to carry out forestry work in the woods. Could it be a coincidence that Jafari is in Court again next week to try to overturn the Council's decision to remove his Permitted Development Rights in Grove Wood? That'll be a no then.

We are in contact with the Council on this matter and as soon as we have clarification over whether this application is legitimate, we will advise people over what they can do prevent this from happening.
Posted by stevem at 13:38 10 comments: