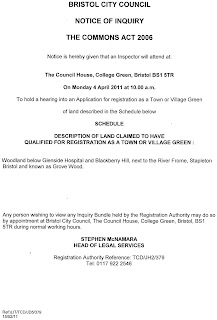 An official notice has now been served to confirm that an Inquiry in to whether Grove Wood should become a Town Green will take place in April.

You can help us by providing details of your use of Grove Wood as evidence to be used at the Inquiry. Please email us at snuffmills@hotmail.co.uk for more details of how you can help.
Posted by stevem at 18:30 No comments: 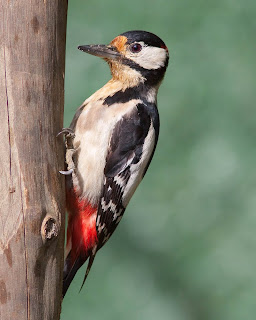 The first signs of spring seem to be showing up in the valley. Greater spotted woodpeckers have been heard drumming, while great tits have been seen carrying nesting material around. Some of the ducks already have paired off along the river too. Snowdrops are also out in the garden, hopefully the first of many flowers to come.
Posted by stevem at 20:24 1 comment: 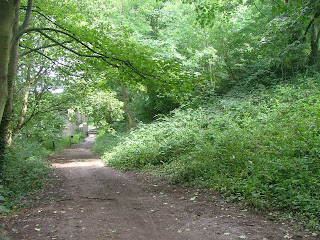 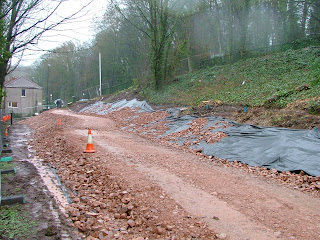 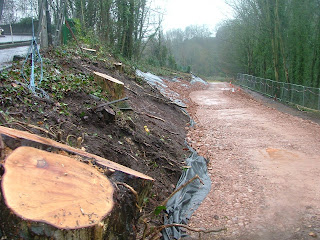 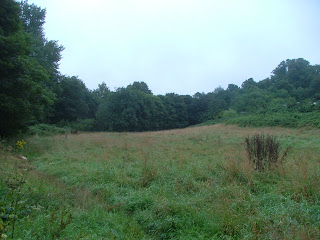 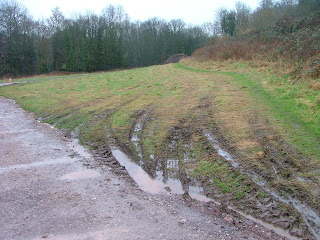 We have been getting reports that the works to construct a cyclists' ramp in Wickham Glen are damaging the area and we have been to have a close look too.

Work of this kind is always messy, but these before and after photos do show the serious impact that the works are having on the Glen.

Mark Logan, our Vice Chair, has been to take a close look so that he can compare the work being done with the precautions that were meant to happen to make sure the construction of the ramp has the least impact possible. Here's what he reports:

* At the entrance to the Glen a section of wall has been removed (at no point was this ever mentioned) thus destroying part of the historic fabric of the Glen.
* At the compound outside the Glen, soils have been stripped and just dumped behind the wall and into the woodland edge.
* As you go into the Glen a large pile a tree trunks etc has been dumped next to the river bank.
* There has been excessive movement of plant across the Glen that has occurred after the access track has been constructed. This can be clearly seen by the tracks going across the grass and then onto the track chewing up the geotextile separator.
* Just before you get to the ramp roots and debris has been dumped into the edge of the brambles.
* When you eventually get to the woodland and ramp area things are not being done in accordance with the arboricultural development statement. It categorically excludes the use of herras fencing with rubber feet and also states a wooden kick board should be used at its base.
* The Group 2 trees are supposed to be fenced and this has not been done.

We have constantly expressed our concerns over the potential damage to the Glen during construction and we were assured that the Glen would not be damaged. Of course Wickham Glen can recover from a lot of the damage, although it probably will never have the same special feel that it had before. But even so, how long will that recovery take if the work is not being done with enough care and attention?

We will be meeting the Council next week to discuss the situation.
Posted by stevem at 18:54 10 comments: