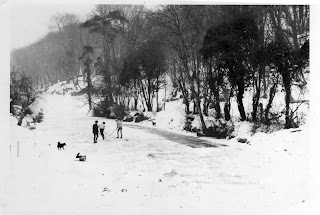 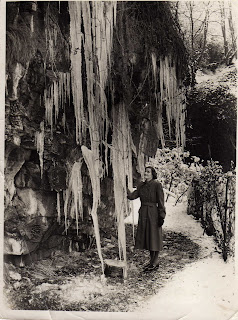 Apparently December 2010 was the coldest one on record, but these photos show it could have been a lot worse. The top picture shows that the River Frome was so frozen over in 1963 that people could skate on it. The lower picture shows massive icicles hanging off the old quarry faces in 1947 - another exceptionally cold winter.

Photos courtesy of Sheila Hill. If you have old photos of the area, we'd love to see them - send them to snuffmills@hotmail.co.uk
Posted by stevem at 20:08

Amazing photos! Actually the River Frome froze recently from bank to bank in late December 2010, just upstream of the wier to the start of the glen. It wouldn't have held a dog, let alone a person.

What about starting an online gallery or Flickr site for the Valley? Then people could upload their own content, though I reckon it should be moderated.

Amazing photos! Where was the frozen river one taken from? It looks like it may have been from the Broomhill Bridge.

As Martyn says the river was also frozen over in 2010 - the last time was on Christmas Day and it stayed that way for 3 days. The ice was about 1 inch thick so not strong enough for skating, unless you were a squirrel or a moorhen, both of which I spotted sliding about on the ice!