Late this afternoon Bristol City Council's Cabinet decided unanimously to declare Grove Wood a Local Nature Reserve and to compulsory purchase it from the landowner if they cannot reach a management agreement with him on reasonable terms.

They received 105 statements in support of the proposal, including 26 from pupils from Begbrook School. There was only 1 statement against, from John Mair, Lord Jafari's "solicitor".

Among the flood of statements in favour, there were impassioned pleas from so many people about the woods, its wildlife, their enjoyment of it and the damage that has been done by the current landowner.

The statement from John Mair made serious allegations against a Council officer basically accusing him of being in the pocket of the Action Group. For the record, the Group has often been frustrated by the refusal of this officer to take action when situations have arisen in Grove Wood, which must mean he has acted in a fair and even handed way.

The Cabinet of Bristol City Council saw through the statement by John Mair and were clearly impressed with the level of support from the community. It will still be a long time before Grove Wood becomes a nature reserve, but today represents a big step towards achieving this goal. 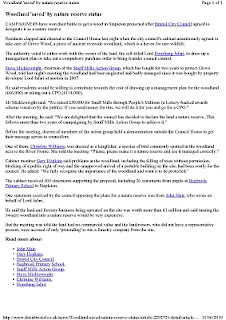 Well done everybody. Great news, but still a long way to go as I suspect that there will be plenty of prevarication on the part of Jafari until the council finally part him from the land.
I also noted John Mair's statement with interest, particularly "Icon Park and the business thereon is worth well in excess of £1Million." Rhino Group's latest accounts as at 31/7/2009 show a net worth of £550. That to £1M in less than a year is hell of a turnaround...

Well done to all concerned. Yesterday's decision was a long time coming. I'm sure I speak for all of us when I say that we all look forward to putting the unpleasantness of the last couple of years behind us. We look forward to participating with and assisting Mr Jafari and his learned associates in the formation and implementing of a management plan for Grove Wood so that future generations may enjoy and learn from the natural wonders therein. A local nature reserve created with responsible input from the relevant bodies and the community around will no doubt display Mr Jafari's committment and we eagerly await his right and correct decision to participate in this worthwhile venture.

I think we all know this struggle will continue until the current landowner is gone as he probably won't co-operate, even though we would all like him to and would appreciate it if he did. I would like to express my heartfelt thanks to Steve and everyone else involved, including all the folks who took the time to write in and to come to demos and meetings for the last 2.5 years. Without you we'd be looking at a quite different picture in Grove Wood now. We won't give up until this is resolved but now I really do feel we're on the downhill slope to saving the trees and the wildlife there.

Local Nature Reserve status is a major achievement for the future of this part-ancient woodland. Now that Natural England and other local groups will be involved in developing a management plan we can all be assured the right decisions will be made. Well done everyone and a great many thanks to the Council for supporting this campaign.

Let us hope the landowner will come to his senses and will not hinder the implementation process, though early indications from his phony solicitor suggest they are not willing to deal with anyone involved to date.

Perhaps it is time we turn our attention back to getting the top footpath designated a Public Right of Way.

Hearty congratulations to everyone concerned in securing the future of Grove Wood as a Nature Reserve. Interesting to read Mr. Jafri's opinion regarding the area being a 'death trap', presumably he will have some auhority through formal qualification to make this judgement? I cannot recall any fatalities among the countless folk who have enjoyed using this resource over many decades. Nice try Mr.J - Bob C (Fishponds)